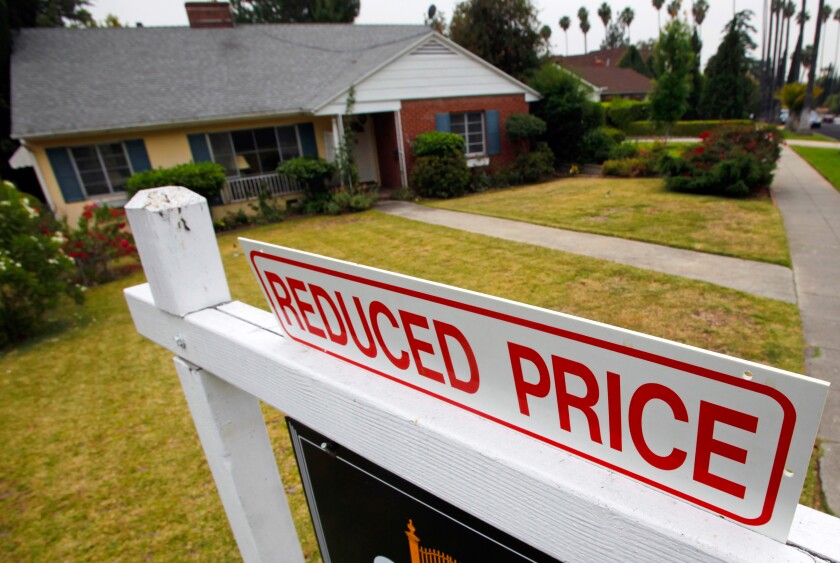 Welcome back to the Real Estate newsletter. It’s been quiet lately … too quiet.

By quiet, I mean no more headlines about 100 people crowding into an open house, or bidding wars causing homes to sell for twice their asking price. In the wake of an ultra-competitive housing market driven to dizzying extremes by the pandemic, do we dare ask the question of whether things are starting to slow down?

The signs are there. Sales are down. Inventory is up. Will prices fall next?

We spoke to some analysts, and the growing consensus appears to be yes. It’s hard to say how much and when, but a few experts are forecasting price declines as early as next year.

We also found some time this week to check in on “The One,” that 105,000-square-foot mega-mansion that sold for $141 million at auction earlier this year after a brutal battle between every lender that thought they deserved a share of the spoils.

To no one’s surprise, the fighting has continued even after the sale, as one lender has filed a lawsuit against another claiming that a document was forged in order to skip the long line of lenders to get repaid faster. The house has been in the works for a decade; by the looks of things, it might be another decade before the drama surrounding it finally ceases.

The two most notable listings of the week caught our eyes for very different reasons: one for its stunning architecture, and one for its incredibly ambitious price tag.

Let’s start with the architecture. In Los Feliz, a neo-Mayan-style masterpiece built by Lloyd Wright was sold for $6.16 million. Formed from concrete textile blocks, the dramatic mansion hovering above Franklin Avenue looks like a cross between a temple and the gaping mouth of a great white shark.

The ambitious price tag takes us to Malibu, where a one-bedroom home hit the market for $18.45 million — by far the highest price for a one-bedroom in all of Southern California. It was owned for half a century by late “Commando” actor James Olson, who picked up the property for just $47,500 in 1971.

Finally, we found some DIY inspiration from a former garage transformed into an 850-square-foot accessory dwelling unit loaded with light, lined with houseplants and bursting with bright splashes of color. The photos alone are worth a click.

As always, while catching up on the latest, visit and like our Facebook page, where you can find real estate stories and updates throughout the week.

Rising mortgage rates have slowed the housing market across the nation and Southern California, writes Andrew Khouri. Sales are down, inventory is rising and many prospective buyers and sellers have a simple question: Will home prices fall?

According to some analysts, the prospect is growing more likely as the slowdown deepens, with some now adjusting their forecasts to call for price declines next year.

Such predictions mark a shift from earlier this year, when there was greater expert agreement that rising mortgage rates would simply slow price appreciation. That is: Prices would keep climbing but less than they had in the last two years.

“It’s noteworthy,” said Jordan Levine, chief economist at the California Assn. of Realtors. “Prices are going to go down.”

Fighting continues over ‘The One’

When the megamansion known as “The One” was auctioned off in March for less than half its $295-million list price, it wasn’t just a deal for the buyer: It set the stage for what is turning out to be a nasty fight among creditors, writes Laurence Darmiento.

The $141-million sale of the 105,000-square-foot property to L.A. fashion mogul Richard Saghian meant that some major lenders of the bankrupt Bel-Air project could be out of the money, given claims against the estate totaling more than $250 million. Now, one lender has filed a lawsuit claiming unfair business practices against another and alleging forgery of a document making it second in line to be repaid.

The lawsuit was filed last month in U.S. Bankruptcy Court by the investment firm of Julien Remillard, a former longtime associate of developer Nile Niami. The home’s bankrupt limited liability company, Crestlloyd, had sought court permission to pay nearly $104 million out of the $138 million the estate received from the auction to a different lender, Los Angeles billionaire Don Hankey.

One of Southern California’s finest examples of neo-Mayan architecture, the singular, striking residence resembles a temple but has also drawn comparisons to a cave or the gaping mouth of a great white shark.

Records show the seller is Dan Goldfarb, a cannabis entrepreneur best known for founding Canna-Pet, which sells hemp products designed for animals. He bought the iconic estate for $4.7 million in 2018 with plans to turn it into a cultural hub for art and events.

The buyer is Nate Daneshgar, whose family owns Grand Central Market in downtown Los Angeles. He becomes the latest in a long line of notable owners including its namesake, painter John Sowden, and George Hodel, an L.A. physician who was named a suspect in the Black Dahlia murder case. For this notorious tie, the property’s website claims that the house “might hold the key” to the unsolved mystery.

Malibu is a market without precedent. The coastal community boasts some of the most sought-after real estate in the country, and as a result, it regularly sees record-setting deals and astronomical price tags.

The latest listing to shoot for the stars is in Malibu’s Point Dume, where a house with only one bedroom and one bathroom is asking $18.45 million.

That’s the priciest tag for a one-bedroom home in all of Southern California — by a mile. To find the second-priciest, you’ll have to head to Newport Beach, where a 1,200-square-foot house in a guard-gated community is up for grabs at $5 million.

However, the Point Dume property offers a lot more than just a bedroom.

A garage transforms into a colorful ADU

When Shana Gross toured an 850-square-foot accessory dwelling unit, she finally found a rental that had everything she was looking for, writes Lisa Boone.

With clerestory windows and skylights incorporating views of the outdoor landscape like a picture, known as the Japanese art of shakkei, or “borrowed scenery,” the unit felt much larger than its 850 square feet.

The former garage was converted into an ADU by Bo Sundius and Hisako Ichiki of the Los Angeles-based firm Bunch Design for about $250,000 in 2018.

Vaulted stepped ceilings and multiple skylights give the ADU an airy feel, while clerestory windows offer privacy on the dense lot. Color is an important element in the interiors, where sunlight reflects off the cheerful yellow surfaces and a red-rimmed skylight in the bathroom that bathes the room in warm pink tones.

Beachfront living in Southern California costs a fortune, but MarketWatch took a look at five beach towns where you can buy a house for $250,000 or less. The options include coastal communities in New Jersey, Florida, Texas, Puerto Rico and Mississippi, where the median home value is less than $120,000.

Through countless interviews with agents and experts, all I’ve learned for sure is that no one really knows where the market is headed. So some agents are turning to a higher power for information, navigating the wild market using tarot, sunstone crystals and chakras. Curbed calls it “the prosperity gospel geared toward the audience of ‘Selling Sunset.’”