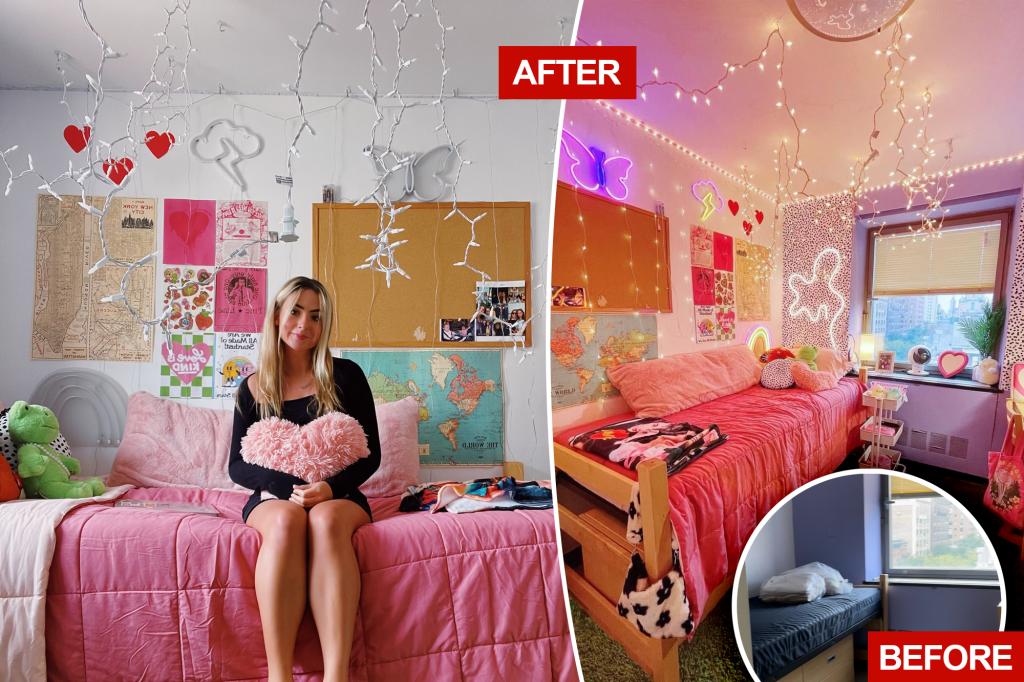 Fashionable freshmen are going back to school in style, making their grand entrances on campus by transforming the cinderblock walls and wood-paneled furnishings of their university-issued dorms into suite masterpieces. And most of them are spending less than $300 to get the job done.

The dormitory overhaul trend is buzzing on social media with wow-worthy “before-and-after” clips being shared to TikTok. The hashtag #DormTransformation has amassed over 57.3 million views.

School is for jewels

To help little sister Athena make a fresh start as a college freshman, nurse Alethea Johnson, 29, offered to deck out her dorm at Morgan State University in Maryland.

Armed with a $300 budget, the creative New Yorker turned the 18-year-old’s dank digs into dazzling quarters fit for a queen.

“I wanted to redesign the room to match her style,” Johnson, from The Bronx, told The Post.

Big sister drew inspiration from professional photos that a sequin-clad Athena had snapped of herself for her birthday in January. She hung three of the images — in DIY bedazzled frames made out of $1 foam boards from Dollar Tree and $10 gems from Amazon — above the lofted bed. Individual spotlights above each of the three pictures ensure that they really shine.

“I wanted the colors of the room to complement the sequins my sister was wearing in the photos,” said Alethea.

She further elevated the once-dank space with printed wallpaper, plush pillows and a stylish throw. The whole look took Alethea four days to conceptualize and just two hours to install.

“Interior design is something that I’ve always loved to do,” she said.

Barbies girls in a Barbie world

When pink-obsessed Olivia Pistoné and roommate Madeline Haver sought to embellish their accommodations at Louisiana State University with rosy furnishings and gold accents, professional decorators quoted them upwards of $6,000. So, the besties, both first-year students, decided to take matters into their own hands and transform their beige-colored chambers into a vibrant dollhouse.

“I saw girls from [the University of Mississippi] re-create their dorms so beautifully, and I was like, ‘I really want that, and I think I can do that on a budget,’” Pistoné, an 18-year-old pre-law major from Houston, Tex., told The Post.

She and Haver, also 18 and from Texas, shared mutual childhood friends and decided to live together after learning they’d be attending the same college this fall. The girls spent five months bargain hunting on Amazon, Overstock, at Hobby Lobby and elsewhere for decor. They ended up each spending just over $1,000 to execute their vision, purchasing items such as a massive pink and white rug ($50 from Overstock.com), chic acrylic chairs ($110 a piece from Essentials with Eden) and a stylish white dresser ($300 from IKEA). Video of their dorm do-over scored 2.8 million views online.

“If we had to give our dorm a name, it’d probably be ‘Barbie goes to college,’ because pink is both of our favorite color,” said Pistoné with a giggle. “I like pretty things and I want my space away from home to feel good.”

Sydney Hargrove was uninspired by the dreary vibe of her single, poorly lit dormitory at Hunter College on Manhattan’s Upper East Side. So, the sophomore spent a few hundred bucks on wall art, funky neon lights and a large rug reminiscent of grass to create the bedroom of her wildest dreams.

“Before I redesigned it, the dorm was quite bland and it didn’t have a lot of character,” said Hargrove, 18. “It was cold, not a bright and creative space.”

The Long Island journalism student and her parents spent six hours installing her vision, which included items such as black-and-white polka dotted wallpaper ($25 at Amazon), artsy rope light ($50 at Amazon), dangling canopy lights ($25 at Big Lots) and a collection of colorful neon signs in butterfly and rainbow shapes ($25 each at Target).

She shared visuals of her dorm overhaul to an audience of 2.3 million impressed TikTok watchers. However, some online haters popped in with shade.

“A lot of people were commenting, ‘This is so dumb, you’re only going to spend 9 months in here,’” Hargrove said. “But, I spend a lot of time in my dorm, and I’m taking some online classes due to COVID, so I want this space to be as comfortable as possible.”

At the University of Mississippi, aka Ole Miss, dorm room makeovers have been a tradition for years, and freshmen Ansley Spinks and Taylor Robinson were eager to partake. The two 18-year-olds jazzed up their living space with lavender mood lighting, luxe furniture and lounge-like decor.

“Anybody who walks in says ‘Oh my God, this is so cool,’ and everybody wants to lay on our big, fluffy rug,” said Spinks, from Marietta, Georgia, of their $150, white-and-gray Moroccan-style carpet from Wayfair.

They each spent about $1,000 on room fixtures such as a beloved sunset lamp (around $20 from Amazon), a $300 futon from Amazon, matching purple neon signs of their respective names ($130 from Etsy) and cushy headboards that come complete with built-in electrical outlets ($100 each at Walmart).

“We wanted to make our dorm feel like home,” said Spinks, who hopes to become an actor. Her dorm reveal fetched 3.8 million views on TikTok. And Robinson, who is interested in a career in anesthesiology, agreed.

“I’ve seen my friends dorms and if I lived there, I’d be so unhappy,” said Robinson, from Denton, Tex. “This feels like home and we love it.”